When I was a young music student, I heard the great Wagnerian soprano Birgit Nilsson sing with an orchestra. Even though I was sitting high up in the balcony, my reaction to her powerful, sustained high C sent shock waves of electricity through my body and tears filled my eyes. Years later, when I was a professional singer, I performed a recital where I produced my own high C near the end of a piece. A lady in the back row of the audience erupted in an arm-waving hysteria with a slight scream. After the concert, she came up to me and apologized for the episode. I said: “I understand completely.”

During the mid-June “Ring of the Nibelungen” produced in Müpa Budapest’s Wagner Days Festival, this visceral reaction phenomenon happened to me repeatedly throughout my four nights of attending this masterpiece of musical mythology. The “Ride of the Valkyries” that opens the third act of “Die Walküre” gave me another massive jolt of joy juice after hearing the eight Valkyries’ thrilling vocalism (including Brünnhilde’s repeated high Cs) as well as the vibrational ecstasy of the sound of eight French horns emanating from the orchestra pit. My immediate neighbors in the audience thought I was having a medical emergency.

“We’ve all been deprived,” explained Etelka Polgár, the Revival Director for Director and Set Designer Hartmut Schörghofer’s original Ring Direction. “We didn’t get to perform this work for two years, due to the pandemic. Maybe that’s why we perceive this music with such joy now. And why the singers are so excited to be back on the stage!”

Adding to the level of nervous excitement, the opening of the first of the two Ring cycles (the second cycle is June 16-19) was beset with a last-minute cast change for Brünnhilde, who had taken sick during rehearsals. While that’s a relatively normal situation in show-biz, one cannot disregard the amount of angst it creates in the opera world: “You cannot find many Wagnerian sopranos to replace Brünnhilde [on short notice]!” exclaimed the festival’s Maestro, Ádám Fischer, in a pre-concert interview. “This kind of thing is always a challenge but it will be fine.”

But the vast number of thrills in this four-opera Ring (with Fischer conducting the Hungarian Radio Symphony Orchestra), starting with the oceanic overture to “Das Rheingold,” are not always strictly musical. Aside from the sonic treasures in the score’s 16-plus hours, there’s the extraordinary opportunity for listeners to interpret the story, the individual characters and their relationships to each other, and how it’s all presented on stage. Volumes have been written about the Ring, Wagner, Norse mythology, Bayreuth, and more, so I avoid a musicological perspective here. I can only describe it on my own experiential level. And no two people will experience it in the same way. This musical marathon is the Mount Everest of Opera, and in June in Budapest, Müpa becomes Valhalla, the mythic home of the gods.

Valhalla’s main inhabitants for this cycle included the indefatigable Helden-tenor as Siegfried, Stefan Vinke; two brilliant sopranos who shared the mighty role of Brünnhilde, Catherine Foster and Allison Oakes; with his spear always in hand to command, Tomasz Konieczny (and later, Egils Silins) as the god Wotan, excelled with potent singing and cogent acting. In the role of Wotan’s wife Fricka was the consummate musician Atala Schöck, and the lovely Karine Babajanyan made her debut in an affecting and vulnerable portrayal of Sieglinde. Erda, the earth-goddess and truth-teller to her son Wotan, was sung by contralto Nadine Weissmann, making her Hungarian debut.

In the smarmy underworld cave of the Nibelungen dwelled the character-baritone Jochen Schmeckenbecher as the nefarious villain/Mafia boss Alberich; two superb comedic tenors, Christian Franz and Cornel Frey, as the scheming scoundrels Loge and Mime; and as the two storied giants Fafner and Fasolt, basso-profundos Walter Fink and Sorin Coliban.

Adding more malevolence to the setting were several omnipresent animals around the characters: Wotan always had two giant ravens at his side, Alberich had a snarling group of menacing wolves, and a troupe of dancers were amphibious creatures that continually prowled the stage. The only creature that seemed initially like a cheerful symbol was the Waldvogel (gorgeously sung by Zita Szemere), who gave ominous advice to Siegfried – that he would die that day.

A distinctive feature of Müpa’s present Ring production (first performed in its entirety in 2008) in an erstwhile concert hall, is a giant video screen backdrop that provides not only the illusion of a set, but a unique visual track showing a wide variety of physical locations, abstractions that denote thought process, and real-time illustrations connected to the live action.

A many-paneled glass screen shows several underwater scenes of the Rhein-Maidens swimming, a modern high-rise apartment backdrop for the Gibichung family in “Götterdämmerung,” a bombed-out, dystopian city on a hill, a satellite view of the earth’s continents, vultures and other hungry raptors, ancient runic scribbles, and abstract designs that could indicate complex thought were just a few that I noted in the ever-changing visual sphere behind the singers.

Maestro Fischer acknowledges that Müpa’s semi-stagings of these operas is out of the norm but rewarding for many reasons:

“This [Wagner] festival is different from other festivals because this hall gives us different possibilities. I can [create] musical solutions here that I can’t have everywhere. More or less, every hall is special, but my job is to use all of Müpa’s possibilities. The main difference from Bayreuth is that the performers hear each other very well, and I can enjoy more flexible music-making – much more than other places. Also, the stage [here] is bigger and I can place the singers everywhere, which we can’t do in a normal opera house. Wagner sounds different in this hall: this is our responsibility and our challenge.”

Another modern touch of tech was how Erda appeared — as a face on the screen that was reminiscent of scenes in Disney animations where a larger-than-life character would appear in a mirror to speak. The result was visually effective in its creation of a cosmic creature that looms large, but sonically disappointing, as Weissmann’s singing was heard from a special room with a camera, behind the glass screen. This distancing erased the deep vibrational dimensions of her voice, which are essential to her character.

Another defining characteristic of Müpa’s Wagner Days is that the four operas in each cycle are presented in four consecutive days – as opposed to most opera houses that separate the performances over a longer schedule. While that presents a bigger challenge for the performers (primarily the orchestra and conductor), it nevertheless provides a more convenient scheduling for visitors from abroad. Speaking of the latter, I met two audience members from the USA: one from Kansas City for whom this was her second Ring visit, and the other from San Francisco who said she was an ardent follower of her favorite Wotan, Tomasz Konieczny.

The lessons of Valhalla

This was my fourth Ring viewing at Müpa, and the first time to see English subtitles there, for which I’m grateful. With a renewed understanding of the hundreds of details and nuances of everything uttered for those many hours, I now feel it’s a 21st century parable involving two of the many themes that grabbed my attention.

The first is Fear: i.e., how fear is woven into the behavioral structure of certain characters. Siegfried cannot feel fear at all and needs to learn what it is in order to survive; whereas others are motivated chiefly by fear – fear of loss of status and power, which the gold ring and helmet forged from Rhein River fragments can bestow on whoever owns them.

The second theme is an enlightened prescription for humanity: find another way — perhaps a more ancient way — of perceiving male and female in our modern era. The examples in Wagner’s script make this clear throughout, and they diametrically oppose his 19th century generation’s pre-set molds for gender assumptions. The Ring’s male characters fight, insult, betray and kill each other, causing murder and mayhem with demonic schemes. The female characters work in tandem to support each other, and establish their own earthly sovereignty through honest dialogue with fathers, brothers, lovers and husbands. Erda, the voice of wisdom, speaks to Wotan in a way that gently challenges his boasting, delicate ego. He asks her: “How does a god [like me] understand his power?” She answers: “You are not what you say you are.”

Wagner’s final prescription to rid the world of fear and corruption was to return the gold to the waters of the Rhein, where it belonged in the first place. When that finally happened, we saw on the screen that the ageing and scaly Rhein-Maidens had returned to their youth. My personal prescription for everything henceforth is to indulge in the visceral experience of astounding music like this, listen to the lovely message of the Rhine-Maidens, and enjoy the delirious high Cs!

Maestro Fischer sums it up with “Everyone has their own bird, and everyone is right, and it still ends up in “Götterdämmerung.”

The first Ring cycle in Müpa’s 2022 Wagner Days’ were followed by René Papé’s recital on 13 June. The second cycle, 16-19 June, is followed by “Rienzi” on June 22, conducted by Marc Albrecht. 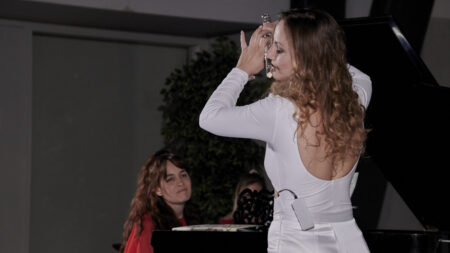 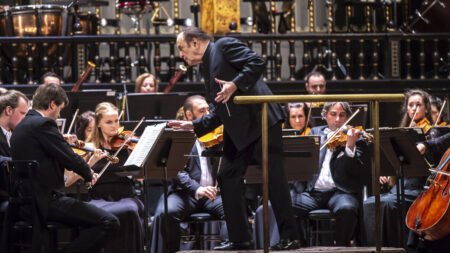 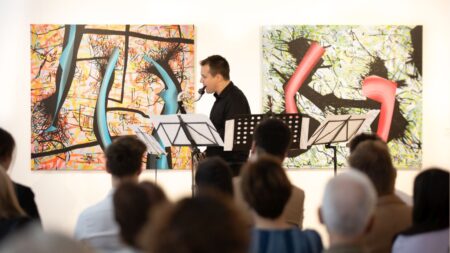