György Pauk is one of the greatest living representatives of the Hungarian violin school. He left Hungary in 1956 and has long been resident in London. The world-renowned violinist was invited by the Chamber Music Department of the Liszt Academy to give a masterclass at the institution in the last week of March, and from 17 June he will chair the jury of the 1st Zoltán Kodály International Music Competition. After an afternoon course, we talked about music education, unleashing talent, what makes a good conductor, and also about watching football matches with György Solti.

I am looking forward with great excitement to this year’s Zoltán Kodály International Music Competition in Debrecen. I have a personal connection with Kodály, as he was my teacher here at the Liszt Academy. We had a quartet at that time, around 1953-54, and we asked him to listen to us. He agreed, and we went to his place, played a piece, and then he sighed and just said: “yes, the music”. Later, of course, he also gave us a few tips.

– What kind of teacher was Kodály?

– To be honest, he was not a very good teacher. He had an amazing head with serious knowledge in it, but he just couldn’t pass it on, because he assumed that the students had the same knowledge. He was not a nice man, in fact he was a very grumpy man. We respected him, but we were also afraid of him. He didn’t let anyone really get close to him, at least not his students. However, the method named after him is a pioneering one because of solmisation, because it makes young people sing. I also have my students sing because it helps them to play their instruments; it makes you hear yourself better, clearer, which is very important. It’s like an ear wash.

– The Kodály method is a method recognised worldwide. But how well can they integrate it into education internationally?

– Not really. It is known, loved, very common indeed from England to Japan, but it is not part of everyday teaching. However, I use it all the time. And, you know, not just because of the clear hearing, but also because it teaches you to breathe well. When we talk, we breathe when we need to, and when we play the violin, it’s equally important.

– You have been teaching for a long time. What do you think is the best thing to pass on to students?

– When my solo career was fulfilled and I could afford not to do all the concerts, I was approached by the London Royal Academy to run small courses for young violinists of exceptional talent. Since I have retired completely, teaching has really become my life’s purpose. Even now, I only take 5-6 students, but I still give masterclasses in Europe.

Coming back to your question, one important aspect is, for example, volume. Even in this small space where we are sitting, one can sense how much the violin playing we just heard would prevail in a large concert hall. If you want to get the message across to the audience, you always have to exaggerate a little. I have given countless concerts in my life, performed in many countries and cities with the greatest conductors and orchestras. I would like to pass on this experience to future generations.

Instrument playing skill is essential. Look at the highly technical artists coming from Asia. Why? Because they are well taught and hardworking. We are lagging behind in Europe. For us violinists, this is particularly important, because playing the violin is difficult. You have to look light as air and at the same time do hard physical work. Think about it, sometimes you have to play in unnatural poses for hours!

– And when is that extra something born that makes the interpretation unique?

– Because of talent. We get that from above. I encourage all my students to ask questions. Why should this piece be played like this? Why so fast? Why can’t it be otherwise? And if, as a result, you try to find new ways of doing things, sooner or later you will find your own voice, in the way that best suits your personality.

– Do your students often ask you questions?

– They are often scared and afraid to ask questions. And that is wrong…

– You are preparing for the 1st Zoltán Kodály International Music Competition, where you will chair the jury. Before the interview, you mentioned that you had listened to 127 applicants. Do you also focus on personality and unique style, or do you concentrate solely on technical knowledge?

– In a competition, it is clear that the latter is the most important, because it is the one that can be measured. If you want to participate in such a competition, you have to play at a very high level. But later, when it comes to deciding between competitors with almost perfect technique, we, the jury members, also look at what makes them more special, how they are different from the others. Can they become prominent figures? But what makes a piece of music so good and cathartic, unfortunately, sometimes we don’t know either…

– However, you can feel it almost immediately…

– After the first two minutes of the aforementioned 127 recordings, I can tell who has the talent, and if they develop it further, they can become a successful artist. You can hear this right away, for example, during the performance of a Bach piece.

– Has violin playing changed much in the last fifty years? How is the performing style different today?

– I am an old-fashioned musician. It seems to me that today it’s all about show and appearance. Amazing technical knowledge, higher volume and much faster pace. Of course, that can still produce good productions, but I don’t think that’s the point of music. Personality is the key concept. What is the secret? This is the really important question. The same is true for conductors. Some conductors operate with huge movements and broad gestures, but it still doesn’t come accross what they want to hear during the rehearsals; yet with others there is no fuss, there are no scenes, just the most basic hand gestures, and still, miracle happens. And the musicians in the orchestra feel it. When a conductor of outstanding talent is in charge of the orchestra, they play differently, they play much better, they can put their heart and soul into it. Orchestral musicians will immediately notice if the conductor has a serious musical message. It’s pretty inexplicable, but it’s true. For me, these include Bernard Haitink, Claudio Abbado and Simon Rattle, or János Ferencsik from Hungary.

– Do you miss doing concerts?

– No, I’ve done enough of them. Unfortunately, as we artists get older, we slow down a bit. Our heads and hands don’t work like it used to anymore, and I didn’t want to wait for that moment. Not to mention all the travelling.

– Several contemporary works are associated with your name. How did 20th century music come to you?

– This is definitely due to the fact that I live in London. London is a centre of international musical life, where many famous composers have achieved their greatest successes. Luckily for me, I ended up at an agency that had Penderecki, Lutoslawski, among others. We got to know each other and became close, so much so that we later played together several times. I am very grateful to have had the opportunity to meet such artists of stature; one of my greatest experiences was when we performed Lutoslawski’s Violin Concerto in London with him conducting. It was an exceptional moment, he was one of the most outstanding composers of the 20th century. It was also in London that I developed a very close relationship with György Solti. Not only did we play music with him, but we also watched football matches together on Saturdays, and the “Match of the Day” was always a special event.

– However, you still consider the pieces of the Viennese Classic to be the most difficult to perform. Why?

– Because everyone knows these pieces. I usually mention two composers in this context: Mozart and Schubert. Or there is Beethoven’s Violin Concerto. You simply stand naked on stage, you can’t make a mistake, because the audience notices it immediately. The same is true of Mozart. With Brahms, we can hide a little behind the composer. And even more so with Bartók. 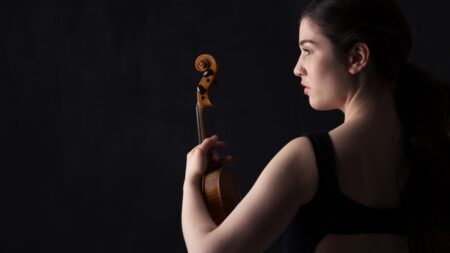